My last couple of artworks were made in response to a call for entries to an exhibition at Red Brick Gallery that was for small wall works 30 x 30cm. Both works are mixed media, and contain no ceramic components (well apart from a commercially produced shard) – which is unusual for me!!

I began making Relic back in April, but did not have any plans for it…. so this call for entries made me think about how I wanted to resolve the work. The work is about objectification, museum-ology and colonisation. I posted on this blog about the axe component of the work when I made it back in April:  https://dawnwhitehand.wordpress.com/2012/04/25/ritual-object-a-new-sculptural-work-in-progress/

As you can see from the sketch in the above post, originally I was going to mount it on some sort of stand, but as this exhibition called for 2D works I mounted it onto a wooden backboard – made from an old frame I recycled, which I think is just as effective at turning it into an object for the consuming gaze. 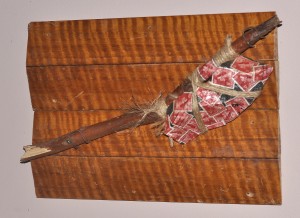 The idea for Archaeological Grid came to me one morning whilst lying in bed and not really wanting to get up!! That’s how I legitimise sleeping in – when I have a blank mind new ideas and inspirations have room to emerge and develop… so staying in bed is a very important part of my arts practice!!

The work is made of the flotsam and jetsam that I am continually collecting and storing – not hoarding – in my studio. Mounted on an old piece of rio – concrete reinforcing mesh – the various components are bound on using some old rusty wire. Said various components are both organic – bone, feathers, shells – and non-organic – hinges, washers, meccano – to name a few. The work itself is a comment on modern society, our throwaway culture, our complacency toward the environment, and the title Archaeological Grid is a play on Archaeological Dig : what will archaeologists be digging up about our society in 5000 years time? What will they infer from their finds? 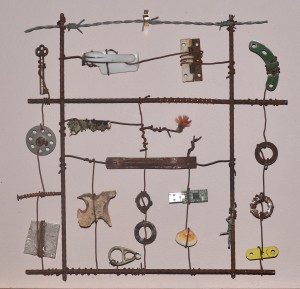 This is the second small works exhibition held by Red Brick Gallery – last year was the inaugural show, and I won first prize with this work: Shards ! 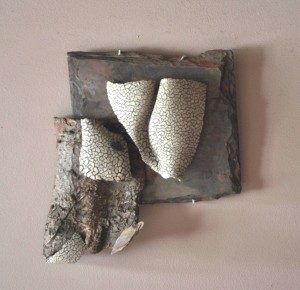 This year I was lucky again, and received a Highly Commended for Archaeological Grid, so the pressure is on for the trifecta next year! 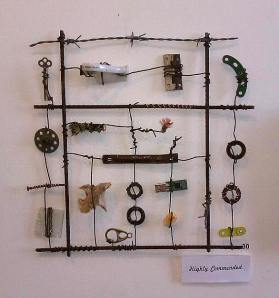